found throughout the Compendium pages to jump to a specific spell or ability.
Version: 10.0.0

This page contains details on Priest Class Tree talents and how they work.

Looking for a Talent guide?

This page is not a guide, see the Guides page for information on what Talents to choose and how to properly use them.

This page will be updated frequently prior to, and following the release of Dragonflight. See something missing, think something is wrong? Contact me on discord at Niphyr#3419 or on the Warcraft Priests Discord.

Prayer of Mending aka. PoM

Words of the Pious​

Words of the Pious

Body and Soul aka B&S

Twins of the Sun Priestess​

Twins of the Sun Priestess

TODO: Shadowlands stuff below, has it changed like halo?

Despite Divine Star being a fairly complicated spell mechanically, there is nothing that needs to be understood or done to get good value out of your casts. Divine Star healing "just works" and on average will do the proper healing you would expect... when it actually returns back to you.

Note: Prior to 9.1.5 the old scaling Divine Star used "basically" rounded the amount of healing down to the equivalent of 6 targets. 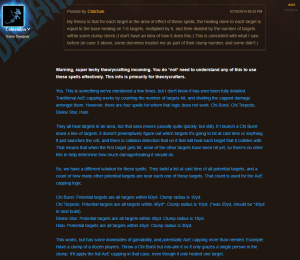 TODO: This has changed since Shadowlands and requires further testing

Note: Prior to 9.1.5 the old scaling Halo used "basically" rounded the amount of healing down to the equivalent of 6 targets.

Surge of Light aka SoL, Surge