This popular page has been updated for Shadowlands!

Here’s the TL;DR section for those of you who feel it could be an HPS loss to read into each point in detail.

Excelling as a healer is about performing the role that your raid team requires to succeed in the encounter, to the best of your ability.

This doesn’t always mean doing the most HPS possible, there are other key factors to the performance of yourself, your healing team and your raid that contribute to your group’s success.

Healing parses during progression don’t matter because pure HPS isn’t the only measure of effectiveness, skill and performance.

There are 8 key contributing factors that lead to high healing parses, most of which are out of the individual healer’s control.

While many of these factors can line up and result in a great healing parse, during progression they aren’t something you should try and stack in your favour to the detriment of your raid. If you’re lucky enough to have things fall your way while doing everything you can to help your raid succeed, then more power to you!

Healing is a zero-sum game, meaning most simply that you can only heal the damage that is taken regardless of your potential to heal more.

Because mana is one of the primary limitations preventing us from using our highest HPS abilities, mana also has a significant impact on potential healing done.

Finally, the healer’s ability to play their class well and adapt to the encounters as required is essential for maximising their HPS outside of all the above-mentioned factors. 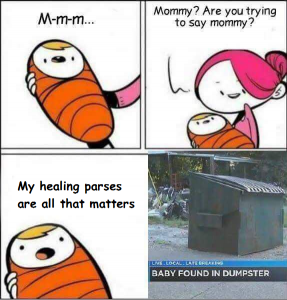 The fewer healers you have, the more healing you can each potentially do. Underhealing a fight is very common in high parses and it happens most often during farm.

The flipside to this is a problem more-so in Normal and Heroic mode than Mythic, but something that plagues many healers that are wondering why they are parsing so low.

Having more healers than your raid needs, and subsequently, less DPS can make encounters much more difficult.

The raid ends up taking longer to complete the encounter which means having to deal with more mechanics than they would on a faster kill. Often this is done as an apparent "safety net" because there may be people dying, where usually those deaths are due to avoidable damage. Too many healers usually leads to healers finishing with really high overheal, not needing to use all of their mana, falling asleep at their keyboard mid-raid or going for healer-damage rankings.

This is one of the harder metrics to judge, and one of the most common causes of people parsing high. The co-healers may not necessarily be bad players, but due to many of the above-mentioned factors, they are ending up with low HPS. This means there is more healing to be done by other healers who aren’t hindered by the same factors that are reducing their co-healers HPS.

If the healer parsing well is an offender of some of the other factors, this can negatively impact their contribution to the healing team and cause reduced HPS as co-healers have to cover for them. Examples of this are refusing to perform roles that result in lower HPS, not dispelling priority targets, demanding favourable cooldown timings and not moving as required for mechanics.

Lower HPS healers can be better contributors to the raids success, despite having lower throughput.

Many encounters have specific mechanics that are vital to your success. This includes healers having something required of them that doesn’t directly translate to more HPS, some of the more obvious examples from recent raids:

Being able to time raid cooldowns favourably through the encounter may net a healer as an individual the highest HPS but may not be what the raid requires to survive.

There also often isn’t the ability to be hitting raid cooldowns "on cooldown" which can mean healers find themselves sitting on cooldowns for longer than they’d like. This is just part of properly managing a healing team’s cooldowns and will always happen in nearly all circumstances during progression. 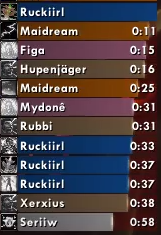 Mana is the resource which defines how often we can use our highest HPS spells, and when we have to worry about being efficient. Being given Blessing of Wisdom and/or Innervate give you the opportunity to cast higher HPS spells more frequently, which when used right can result in a significant healing increase.

Ignoring mechanics is one of the most obvious hallmarks of someone more interested in their own personal performance than the success of their raid. Because most healers output reduced HPS while moving, the ability to avoid moving entirely is typically a significant HPS increase. This includes not having to soak, having others spread so you don’t have to move, not dispelling priority targets and dropping pools of fire in the middle of your raid. These actions generally don’t help contribute to the success of your raid, but they will increase your personal HPS.

The other form of ignoring mechanics is choosing talents, cooldown usage and ability usage that gives you a net-HPS increase over alternatives at the detriment of providing your raid with the best chances at success. Some examples of this:

Healer skill has an equal impact as most of the above points. While it’s important, even if you’re the most mechanically perfect healer in the world you will struggle to parse well unless some of the other aforementioned factors are also in your favour.

As a healer, you should always push yourself to perform optimally, so long as you understand that maximising your HPS isn’t the only factor to success. Working with your healing team on succeeding in an encounter, and utilising your individual strengths and weaknesses to push your raid to victory should always be your top priority.

Parsing well as a healer is something that sometimes happens as a happy accident, but should not be something you either measure yourself and others on or strive for during progression content. Parsing well is for farm-content when you can stack some of the key factors in your favour and get your healing team or raid on board to help you pad your numbers a bit more.

This does not mean you shouldn’t focus on personal performance and trying to improve your gameplay, but you need to do so with the encounter and raid’s goals in mind to be the most effective healer you can be.

Focusing on gear, talents, cooldown usage and traits that aim to just increase your personal HPS, while ignoring the requirements of the encounter can make you really toxic to play with.

Being a healer isn’t just about HPS, it’s about helping keep the raid alive through any means at your disposal.